I recently had the opportunity to run the Big Sur International Marathon. I started to train in January, going to the gym 3-4 times per week for cardio and weight training in addition to my time spent getting my miles in on the road and local trails. I also kept a close watch on my diet, tightening it up as I neared the week of the race. I put in a considerable amount of work to get fit for the race, as this was key to how I was going to perform during the race as well as how fast my recovery would be afterward. As I trained around my work schedule, it struck me how much nursing is like running a marathon, and in honor of Nurse’s Week, I am going to expand a bit on this metaphor.

My marathon day started at 3:30 AM, with me prepping my gear that I would need over the next several hours. I will have to admit I had neurotically checked my bag before leaving to fly to California as well as when we arrived – this was due to an unfortunate mistake made last year, in which my running bag was left behind and I ran an ultramarathon with just (luckily) my running clothes and shoes. So, not unlike when I worked at the hospital, I got dressed in the dark, gathered my bag, laced my special shoes, and headed out into the crisp Monterey early morning.

Doesn’t everyone begin their Sundays at a start line?

My husband drove me to where the buses would take myself and 4,000 other runners to the start line. Instead of the typical loop, the marathon started in forested Big Sur, its 26.2 miles running up to the Pacific coast to conclude in Carmel. The lines for the buses were like walking in with the day shift, some people seemed barely awake, most were quiet, and a few others were having animated conversations while we patiently filed onto the waiting buses. I boarded the bus at 4:30 AM and we made the slow drive down the winding Highway 1.

When we arrived at the start line, the state park was abuzz with runners snacking on bagels, waiting in line for porta-potties, and doing all the weird stretching that runners love to do. We arranged ourselves according to finishing times and stood silently as a fellow runner sang the national anthem. Just like finishing report at the start of a shift, we were poised and ready to go, a little excited, a little fearful, and mostly just plain anxious to get going. A countdown of ten seconds launched us, and at 6:45 AM we were off!

I ran the first mile a little too fast (in under 8 minutes, which was far too speedy for me to maintain over 26.2 miles – just like nursing, running a marathon is all about time management), and tried to reign in my legs for the next six miles. Nonetheless, I also did that in record time, which was aided in part to it all being downhill as we made our way through the village of Big Sur. At mile six we emerged out of the forest and onto the coast, the green grasses swaying on either side of the road with a glimpse of the Pacific ocean on the horizon. Now that we had a bit more room, the runners started to spread out and thin as we began to run up and down rolling hills. 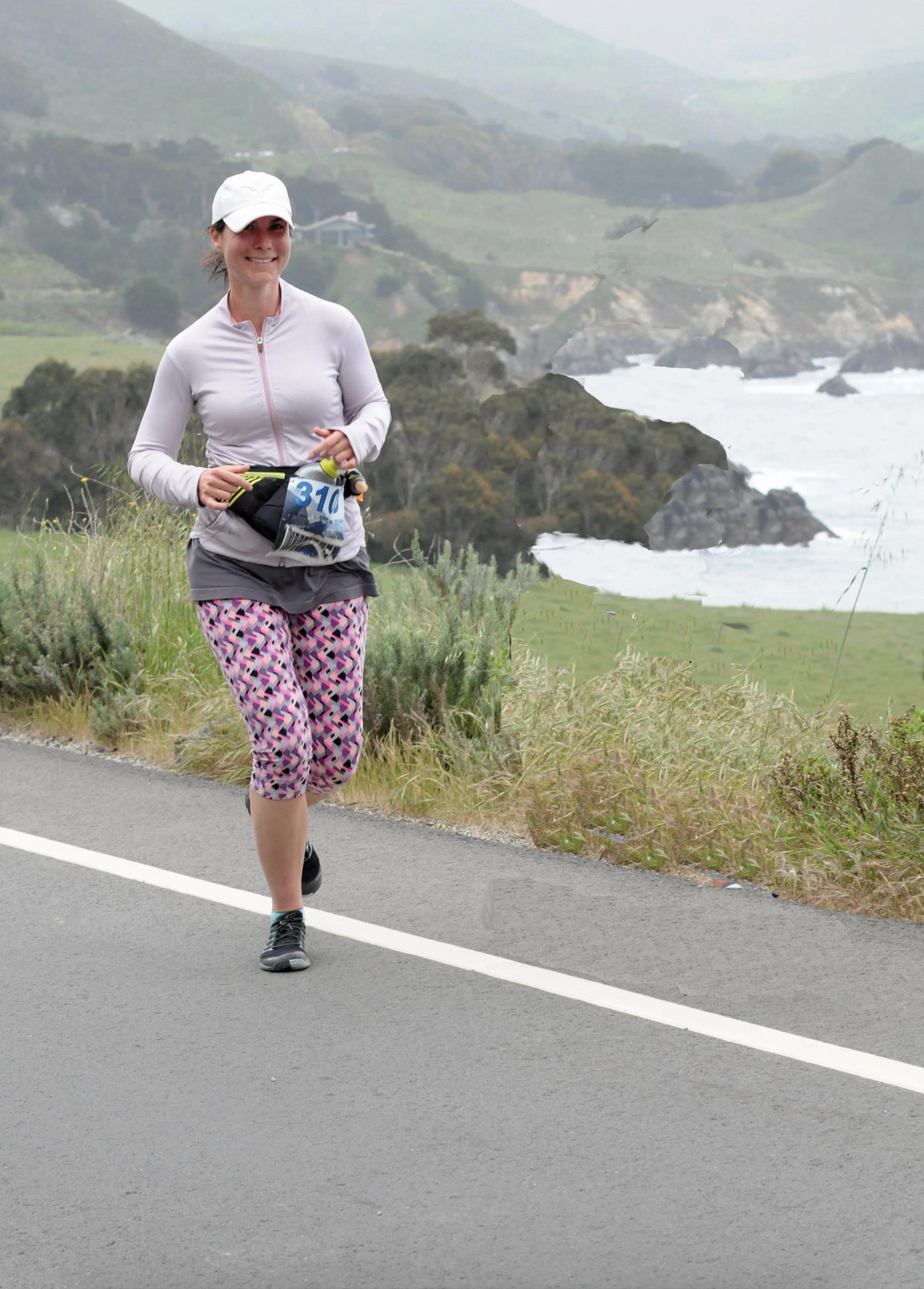 One of many hills – but the bigger the challenge, the more beautiful the view!

At about mile 9, I crested a hill to see Hurricane Point two miles in front of me – a climb of almost 600ft running on the two-lane highway which clung to the edge of a windswept cliff. I could also hear drumming and increased my cadence – I was excited to see the Japanese Taiko drummers who were braving the stormy early morning. Japanese Taiko drums are a 2000-year-old wartime tradition, which is brought back to life today by volunteers who beat an intense rhythm as runners climb to the highest point of the race. And man oh man, did I need that extra encouragement. Hurricane Point was true to its name, buffeting us with intense winds and rain, all the while the drums echoing off the side of the cliffs and cheering us on. I tried to get not too excited about running down the other side and blowing out my quads, but it was a relief to finally stand up straight after running bent over into the wind for two miles.

As the drums faded and we made our way down the other side of Hurricane Point, we began to hear the faint strains of a piano on the wind. Coming around the corner I see Bixby Bridge, a gorgeous half-way mark of the marathon spanning over 700 feet long and 280 feet high. A pianist sat at a baby grand piano on the other side, dressed in a tux (as well as a rain poncho), playing “You Are the Wind Beneath My Wings”. I chuckled at the music selection in light of our windy weather and waved in gratitude as I passed this epic sight. 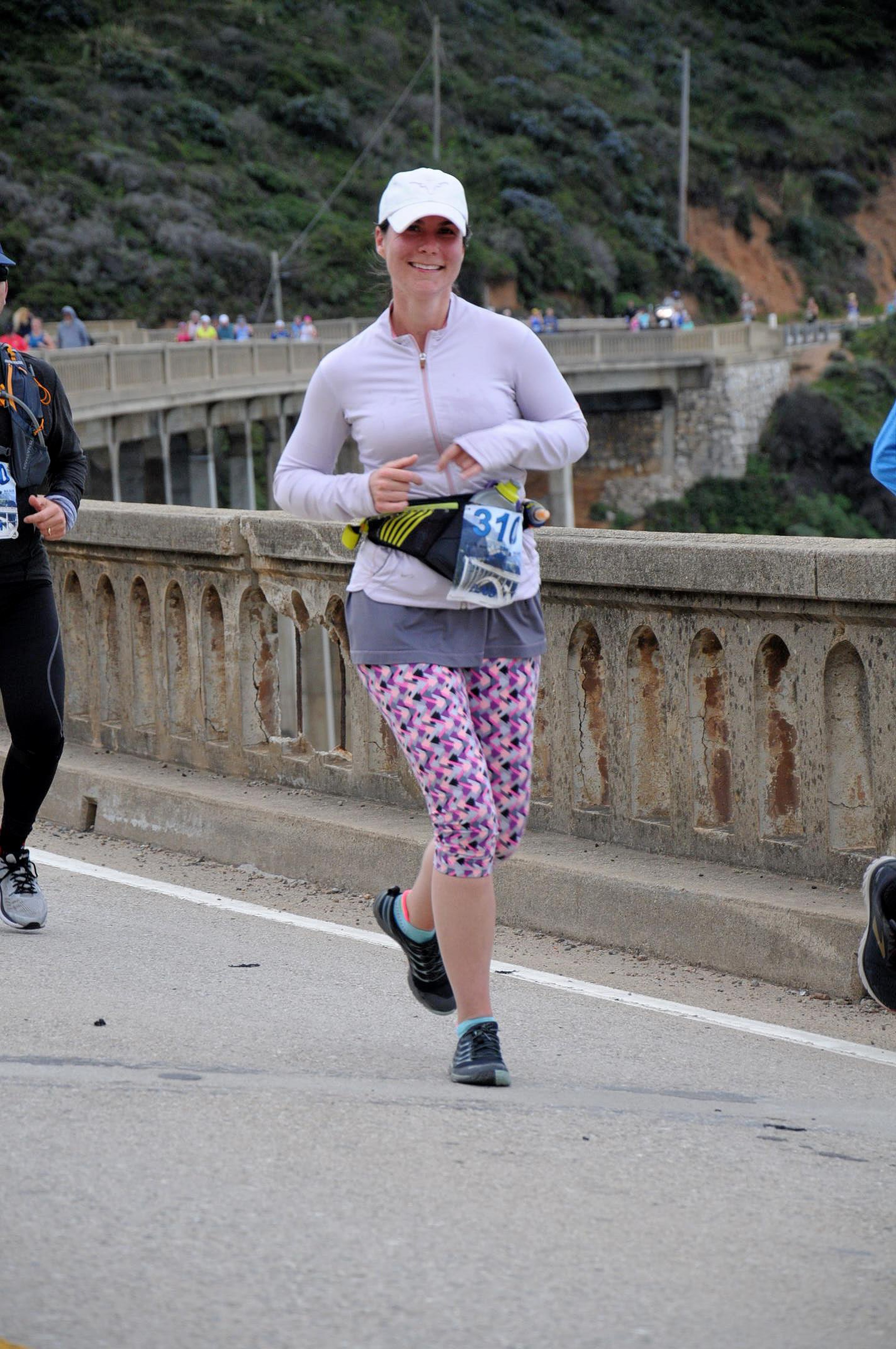 Despite the hills, the wind, and the rain, I felt pretty good at this point, even after climbing the next hill at Rocky Point and seeing many more rolling hills in front of me. At mile 14 I crossed a bridge over a river running onto a beach out into the sea, on which several cows were mooing – another funny site to my road-addled brain. Miles 15-19 passed quickly and when I saw the mile 20 marker, I felt relief knowing that I had run a considerable portion of the race. I think every nurse hits this point in their day – the end is in sight, you are tired, but still, have the energy to think that you are feeling better than you should. Then mile 22 hits…

…And it is a hill, with a climb into the Carmel Highlands. Beautiful, but I’m starting to feel it – the miles, the weather, some dehydration, and the hint of hunger. I have been using each aid station for water, Gatorade, and delicious orange slice (I even stopped to pee at mile 18 – which is a feat in itself, running 18 miles with a full bladder!), but now the aid stations are not quite cutting through the mental fatigue that is setting in. I start to play my “target game” – just run to that next tree, that next orange cone, that next bend in the road. Mile 24 comes a bit faster than I expected, passing belly dancers, a harpist, and a DJ on the way. But just like that one patient falling right before shift change, the course had one last late surprise: a hill at mile 25. Nicknamed “D Minor Hill at D Major Time”, I negotiated with myself that I could walk up it if I ran down the other side. But haha, my legs were done (everyone’s were done, with several runners crouched on the ground at the top of the hill massaging their cramping calves) and I willed myself to move slightly faster down the other side. That last mile felt like 26 – it was slow and curving, and little tortuous being able to hear the finish line but not actually see it.

All of a sudden spectators are on the sides of the road, cheering everyone on with signs and whistles and horns. I can finally see the finish line and I feel a bit of energy come back, along with a surge of emotion. I cross the finish line by myself and being the goofball that I am, throw my arms up in the air like I have won the race (in actuality, the winners crossed more than two hours prior, averaging just under six-minute miles). I was exhilarated and exhausted when I found my husband in the crowd, who was snapping photos of me in my weepy and bewildered state. 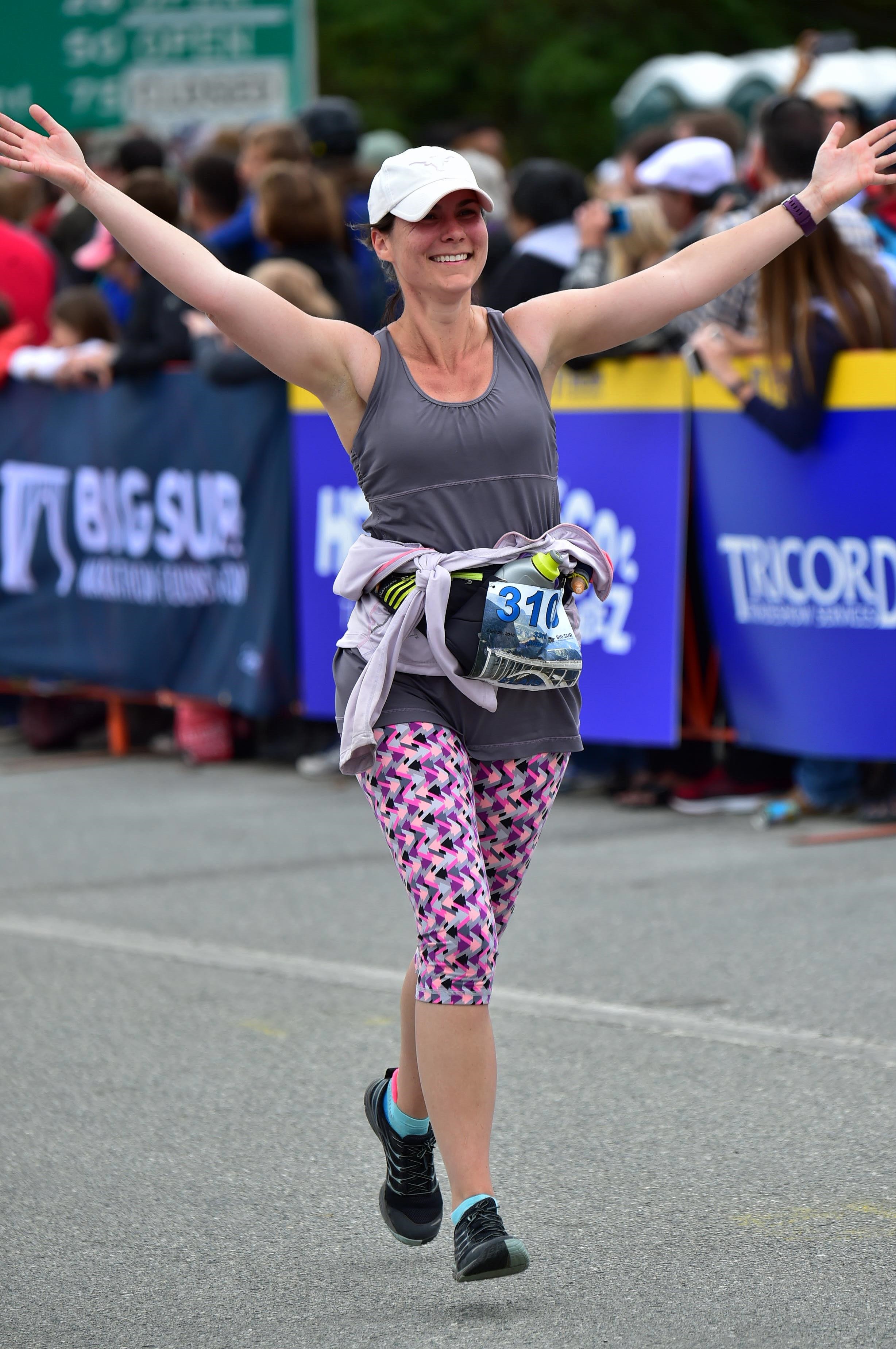 I frequently float over finish lines 😉

It was hard to believe the marathon was over. More than 20 years ago I had watched my Dad cross the finish line several times, a year ago I had my name picked from the lottery to be a runner, and over the past four months I had trained, running up to 50 miles per week. The scenery was beautiful, the course was tough, and the terrain was unforgiving. Just like every other race I had run, the first 20 miles was a physical test, and the last 6.2 were a mental trial. And isn’t that just like nursing? A test of body and spirit? You start off your day (or career) fresh, excited, and nervous, gradually becoming more confident in your skills. There are moments, tasks, days (and sometimes years) that are challenging, some of which you overcome and others for which you have to pace yourself, learning a whole lot of resilience along the way. At points, you feel beaten down, both mentally and physically, which is why it is important to have some cheerleaders on the sidelines. Whether they are standing on the road handing you fresh strawberries or waiting for you when you get home, these people are the ones that both offer encouragement and a mental reset to continue on to your next shift, your next complicated assignment, your next race to the finish. 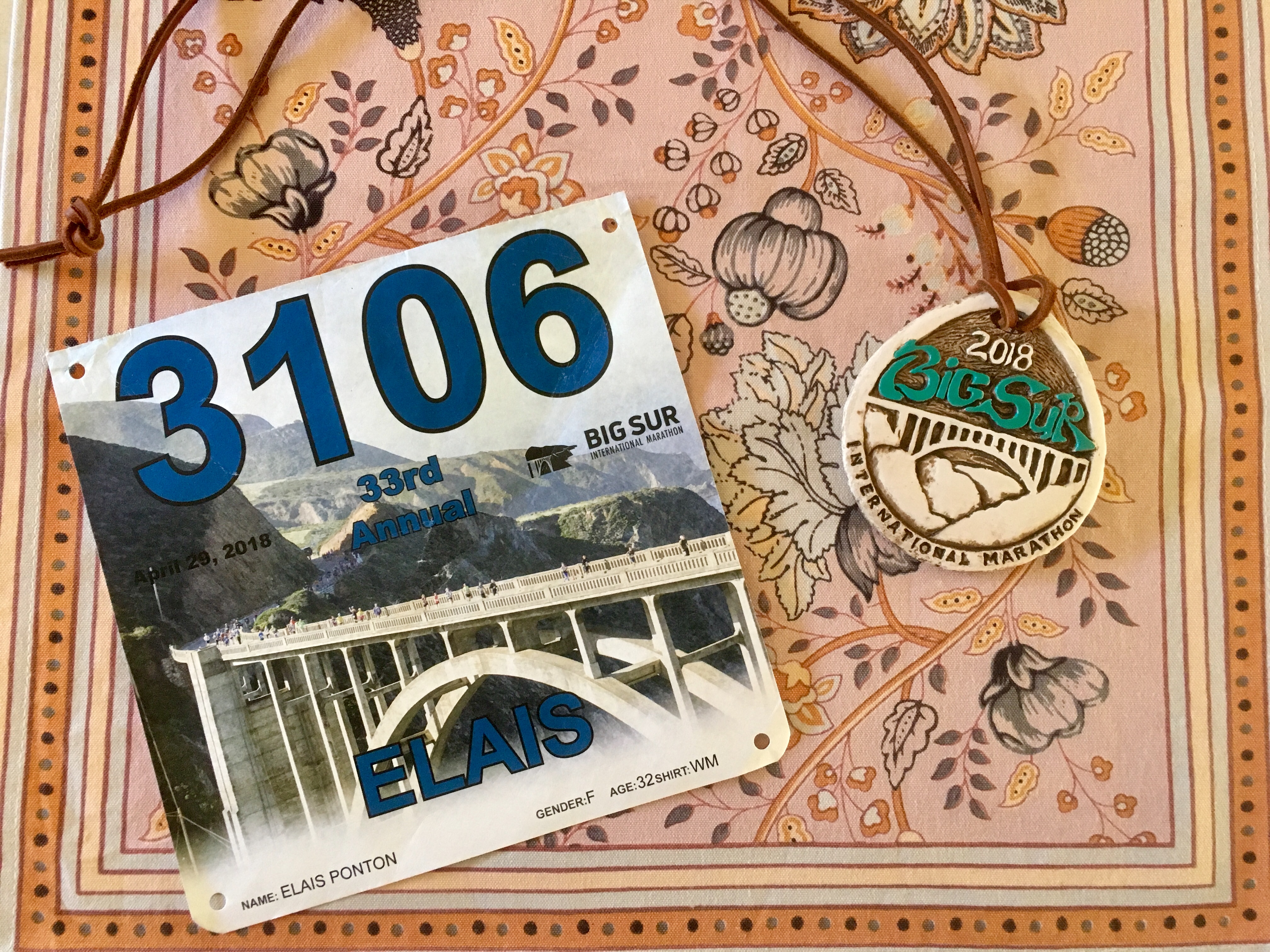 So happy Nurse’s Week to all you hard working nurses out there – nursing is not a sprint, it is a marathon. You have got to be in it for the long haul, pace yourself, be mentally tough, and find your support along the way to help you succeed. We will always have bad days and good days (even though it sometimes it is easier to remember the steepest climbs versus the gentle declines) and sometimes your personal needs come last (like running 18 miles with a full bladder). And while we may not get cheered on at work by people holding funny signs, there will always be champions for nurses, because they get the job done. So keep on running, fellow nurses, and don’t forget to enjoy the scenery along the way. 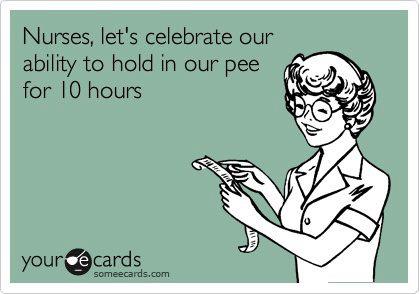 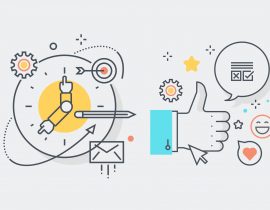 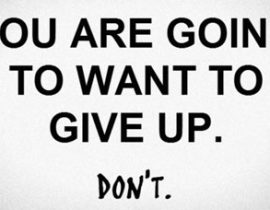